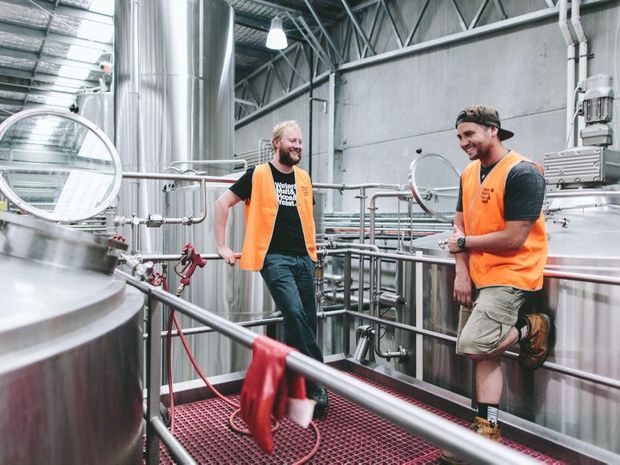 ACCOLADES keep coming for Byron Bay’s Stone and Wood Brewing Company with their Pacific Ale voted as the hottest Australian Craft Beer of 2015.The hottest 100 Aussie Craft Beer Poll in an annual contest where drinkers vote on their top five craft beers for the year.Jasmin Daley of Stone and Wood said while Australia was listening to the Triple J Hottest 100 on Australia Day, the craft beer world was counting down a poll of their own, and our Pacific Ale got number one.”We are so stoked and humbled to have our Pacific Ale grab the top spot for 2015 and if it wasn’t for the support of our local community this wouldn’t have been possible,” she said.”For us, we just want to brew good beer and we’re so lucky to have a passionate team that come to work every day inspired to make this happen.”This recognition is a tribute to our team and a reflection of the incredible community we are lucky to be surrounded by.”Our Pacific Ale is inspired by our home on the edge of the Pacific Ocean and brewed using all Australian barley, wheat and Galaxy hops.Pacific Ale was also voted Australia’s hottest craft beer in 2011.Stone and Wood also had two of its other popular brews in the top 100.Named after Wollumbin, the indigenous name for Mount Warning, the limited release brew Cloud Catcher came in at 29.Hopped with all Australian Galaxy and Ella, Cloud Catcher is a full flavoured limited release ale that has an aroma of apricots, a full bodied mouth feel from the blend of pale and crystal malts and finishes with a dry clean bitterness.First released in 2012, Stone and Wood’s Garden Ale was voted the 65th hottest Aussie craft beer.Brewed with a blend of pale and crystal malts, and both kettle and dry hopped with Ella, Garden Ale has a citrus aroma balanced with a clean malt characters and an easy bitter finish.The Hottest 100 Aussie Craft Beer poll is put on by The Local Taphouse, Crafty Pint and Brewsnews.

We call our beer amber. The judges call it Gold.

A Few First-Timers in the Bottle!